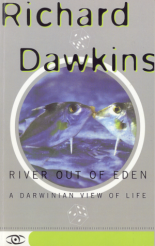 Richard Dawkins is a great man. From the first book of his I picked up, River Out of Eden, to the last one I read, The Greatest Shown on Earth, I’ve never ceased to be amazed by how his passion of biology and his talent at articulating the grandeur of nature ooze out of every single page.

Dawkins is the person who helped me find my atheistic voices in the vocabulary of evolutionary biology. And for that I’ve dedicated many work of art to the great man. For instance, The Lost Cause was wholly inspired by the dozen of books on evolution penned by the man that I’ve read. Similarly, I have written Wikipedia articles on some of his books, such as River Out of Eden and The Ancestor’s Tale, to help guide those who are still searching for their voices.

Here, however, I collect music I have written that are inspired by Dawkins’ work.

We are Made of Stars, subtitled “The Story of RNA”, was one of the first, written in 2006. Not only was it a tribute to Carl Sagan, but more importantly it tells the hypothesis of the RNA World which posits that RNA was the precursor to all current life on Earth. The lyric for this vocal music can be found on Vocal Music from 2006 and 2007.

Climbing Mount Improbable was a short piece written in 2007 to celebrate Dawkins’ book, Climbing Mount Improbable, of the same name. This is an often overlooked book, shadowed by his more-often-cited ones such as The Selfish Gene and The Extended Phenotype. The winding melody ascends and descends slowly and gracefully, following the contour of the Mount Improbable. Originally written for violin and piano, this piece was rearranged for clarinet and piano for my brother’s wedding.

Eternal Bliss was originally written in 2007 for violin and piano, named Noodly Appendages of the FSM (Flying Spaghetti Monster). The violin/piano duet score can be found here. Reading by Yonah Zur and Blair McMillen was recorded. I soon added a cello part to it, and rearranged it for clarinet trio, for my brother’s wedding. The clarinet trio was performed by Gilad Harel, Alistair MacRae & Wei-En Hsu.

Edit War in Wikidom was written in 2007, for violin, viola and cello. This short piece is reminiscent of my experiences editing Wikipedia articles, and comprises 3 mini battles. See for instance my contribution to the demise of most ancient common ancestor, and to the deletion of species integration.

The name Xinhai Dude 辛亥生 is a pun in Chinese, as it means both “he who was born in Xinhai” as well as “he who studies Xinhai”. I had an ambitious plan to write something about the great Xinhai Revolution of 1911, thus my blog https://xinhaidude.com. But after an initial flurry of activities the initiative petered out. One day I will still carry it through. But for now, this website has turned into a conglomerate of my work on various topics of interest to me, including travel pictures, RC model airplane flying, ice skating, classical music composition, science fiction short stories, evolution and atheism.
View all posts by Xinhai Dude 辛亥生 →
This entry was posted in Atheism, Being a Wikipedian, Composition, 無神論, Evolution, 進化論, Free Sheet Music, Science and tagged Cello, clarinet, clarinet trio, classical music, Climbing Mount Improbable, Edit wars, Flying Spaghetti Monster, FSM, piano, Richard Dawkins, viola, Wikipedia. Bookmark the permalink.