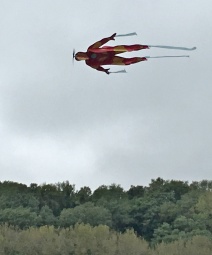 It is December, and the weather has finally caught up with the season. Those unusually warm November weekends are a thing of the past now. I find it increasingly difficult to motivate myself to go out to fly. So instead I sorted through, in the comfort of my home, pictures I’ve taken related to model aviation in 2016 on my iPhone. All of them were about HHAMS (Hempstead Harbor Aero Modelers Society).

As “the” picture of the year, I nominate Ben’s Ironman plane. The picture quality is quite poor, and as a former photography enthusiast I am ashamed of it. I can defend technically why the picture quality is so bad. But I won’t. The subject matter is of the essence here. I don’t believe anyone present on that glorious maiden flight day would disagree with the nomination. In any case, it’s my blog. So Ben wins. Clever fellow. His story will be detailed further down this article.

I’ll show 2016 event pictures in roughly chronological order. I do have tons more pictures from years past, and maybe one day they’ll see the light of the day. For now, I have only time to process and post those from this year.

Let’s start with a day out at the field, braving the freezing wind in a cold March morning. OK. I lied. It wasn’t windy at all (look at the windsock), and we were warmed by the sun. This wasn’t my first day at the field of this year. But it is the first picture I can find of the field since Jan 2016.

This is also the year we finally have our flying field in RealFlight. The above is a screenshot of the flight simulator showing what it would have been like to flying at our field in a late afternoon. I took pictures of the field and stitched them to form a 360-degree panoramic image. With lots of love and labor I added 3D models of all obstacles in RealFlight, and made this flying field available on the official Knife Edge Swap Page. See this article for details: Custom RealFlight Airfields based on the HHAMS Aerodrome.

The spring has arrived! The flying season has now officially started.

There is a plane in this picture. Can you find it? With the advent of summer, once lodged in a tree, a plane is almost impossible to find. If you need a hint, the plane rests atop one of the highest branches in this picture. If that is not enough clue, look in the upper left quadrant. This place is known as Corner of the Lost Planes for a good reason.

Fortunately there is an under-appreciated winter tool that is particularly suitable for the job of retrieving a plane from a tree. I am talking about aluminum snow rakes that are incredibly strong given their miniscule weight.

Custom hook for the snow rake

The club bought a 21-foot snow rake. The Garelick 89421 Aluminum Snow Roof Rake comes in four aluminum segments that can be connected on demand. With two additional donated segments, plus a custom hook machined by Eugene and Paul, we now have a tool that can reach up to 30 feet. That should be enough for even the most unexpected circumstances when the tallest tree at the field jumps in front of your plane.

There isn’t a lot of images of he Garelick rake online. But you can get an idea by looking at pictures of this copycat on Amazon. 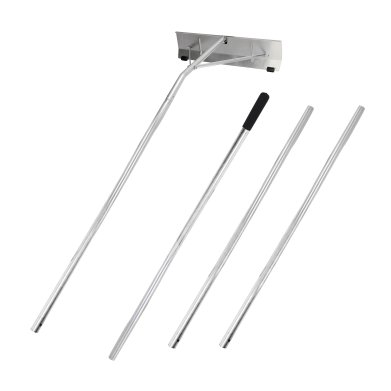 That’s Chris trying to step on our adopted son in June. Fortunately he didn’t succeed. Folks fed this fledgling for weeks at the field. 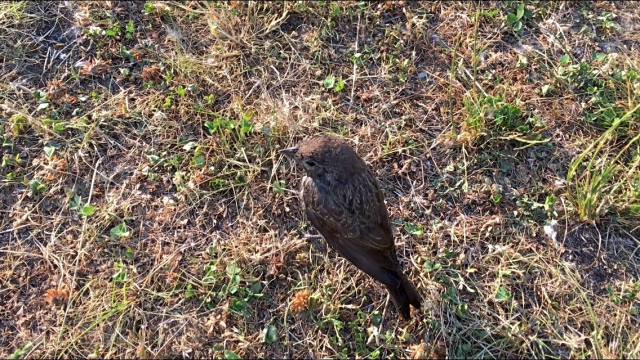 Our adopted son managed not to be trampled

In case you haven’t figured out yet, that was a joke. Chris was this bird’s foster parent. 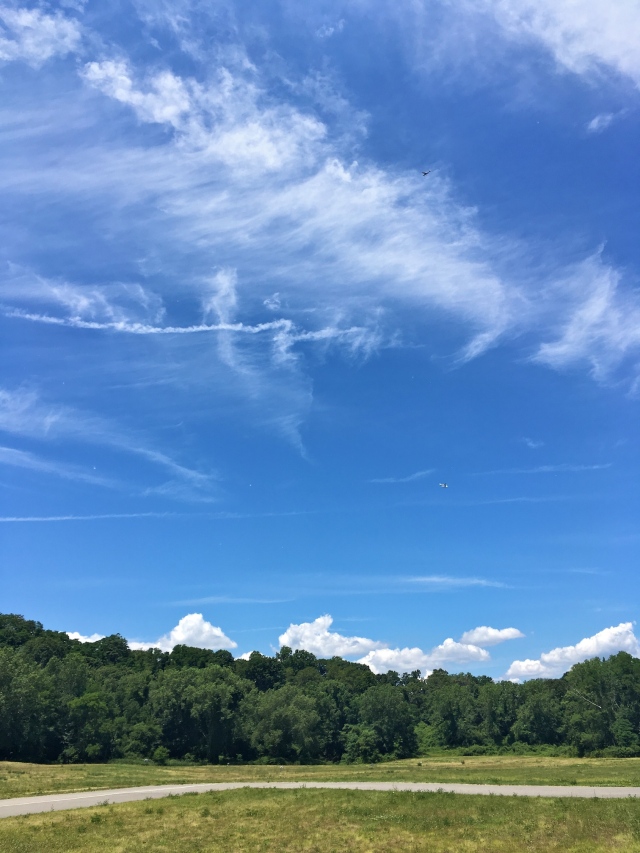 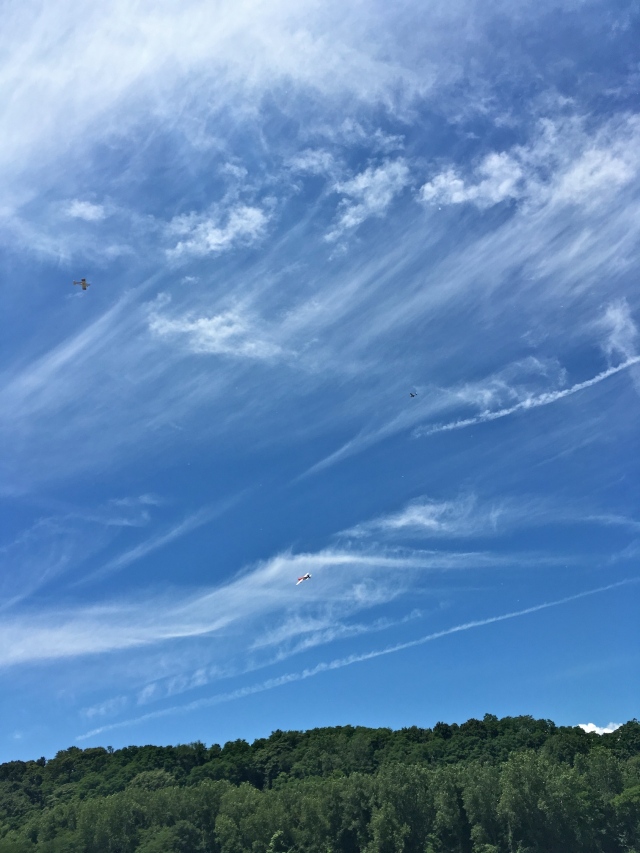 All pilot stations have been taken 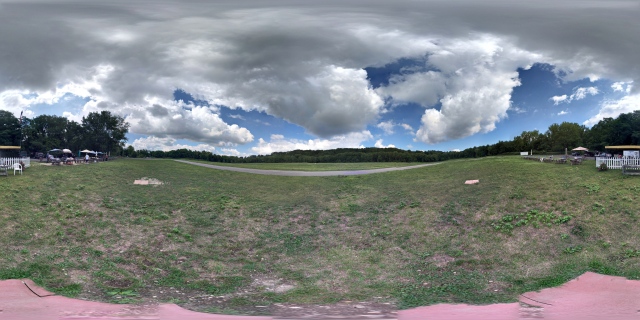 We had our first field meeting, ever.

We tried to enjoy our second field meeting, ever… like we did the first. 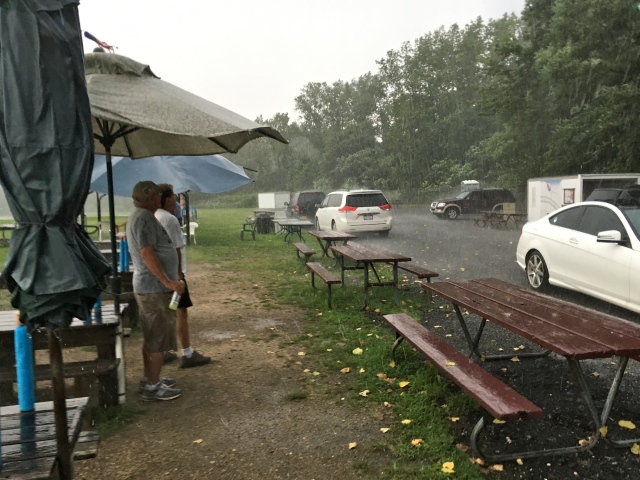 We tried. But it poured.

The Nausau County Police visited our field, after ensuring air space clearance by circling the perimeters of the field twice.

HHAMS members put out our best planes at the town’s Funday Monday in August.

HHAMS members peddling our wares at the Funday Monday 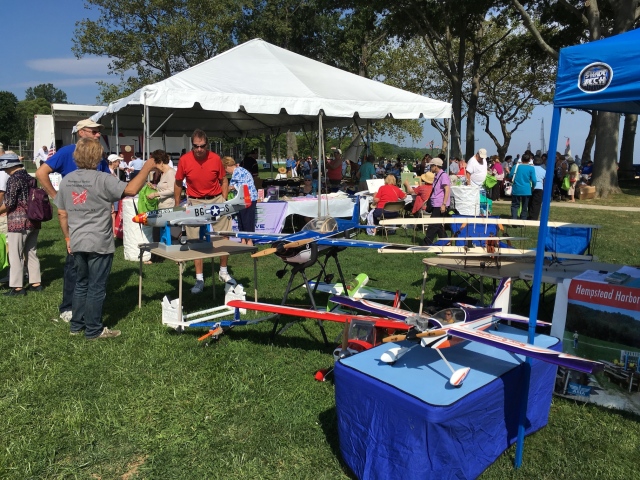 It does not hurt to admire our own planes

I have previously written about making big bubbles. I brought bubble juice and bubble wands to the field to test the idea of possibly putting up an unexpected sideshow at the upcoming Paintball event. 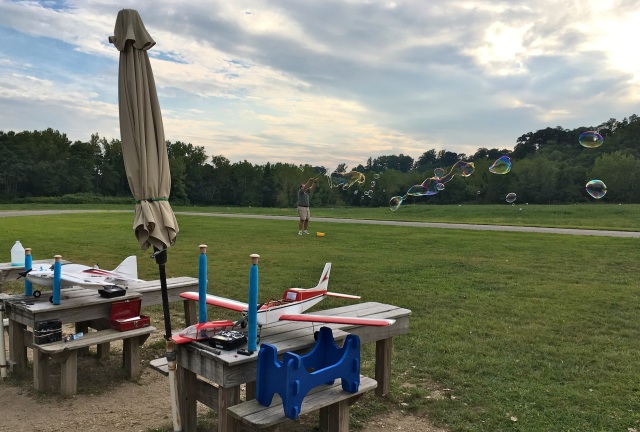 Certain person ridiculed me for being too juvenile. Certain person then seized the bubble wand from me and proceeded to make big bubbles himself.

I ran into this poster advertising our Paintball event at a local supermarket. 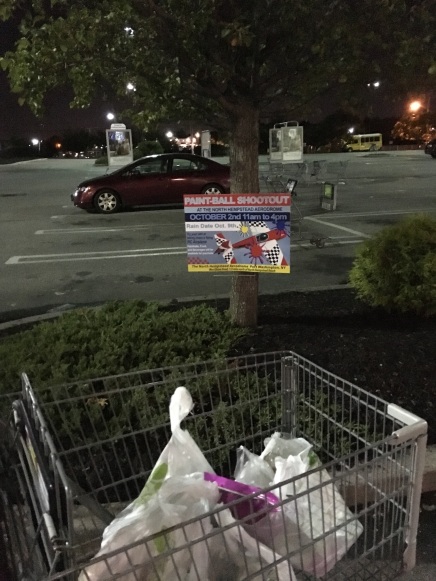 Painball poster at a local supermarket

Some of us bring our own portable charging stations to the field. These are deep cycle automotive batteries.

We now have an online field calendar where one could see today’s official field notifications, and post tentative flying times in order to match up with like-minded flyers. It even shows current weather conditions, plus hour-by-hour wind speed and chance of rain. 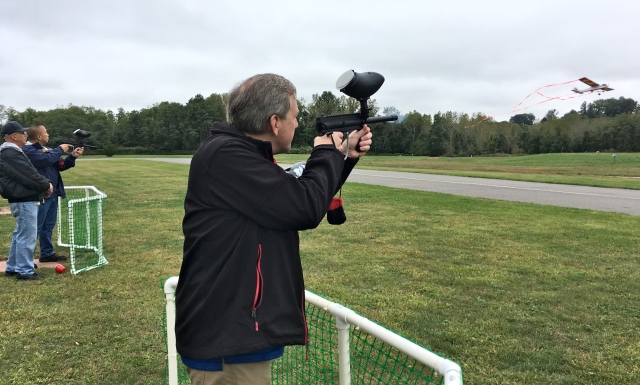 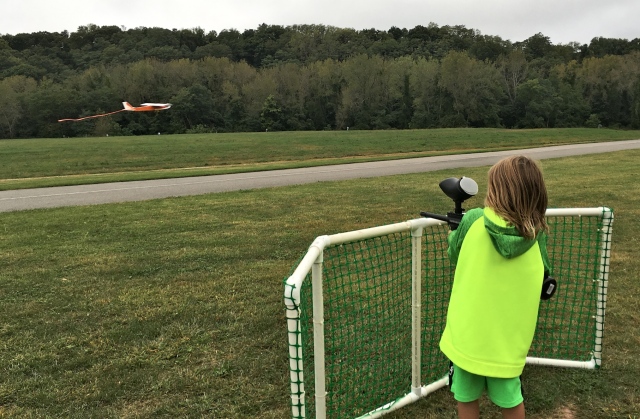 And that was when Ironman made an appearance, courtesy of Ben. As I wrote at the beginning of this article, I think of the Ironman picture as THE picture of this year. 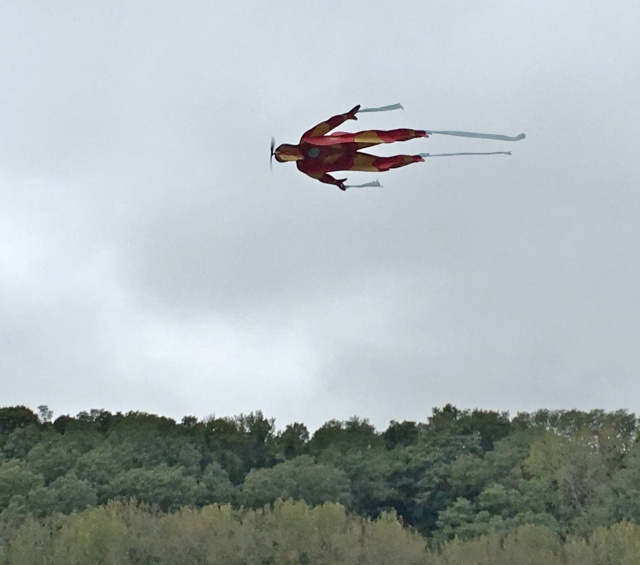 Here is Ben looking at his friend the Ironman in admiration

Ironman in his full glory in the presence of his old friend, Ben

Auctioneer Jim recounting the history of these beloved planes at the October meeting.

It’s now the last day of October. It’s incredible that we are still able to enjoy a warm day of great flying at the field.

In December we had our holiday party at Domenico’s. It’s the 25th anniversary of HHAMS. 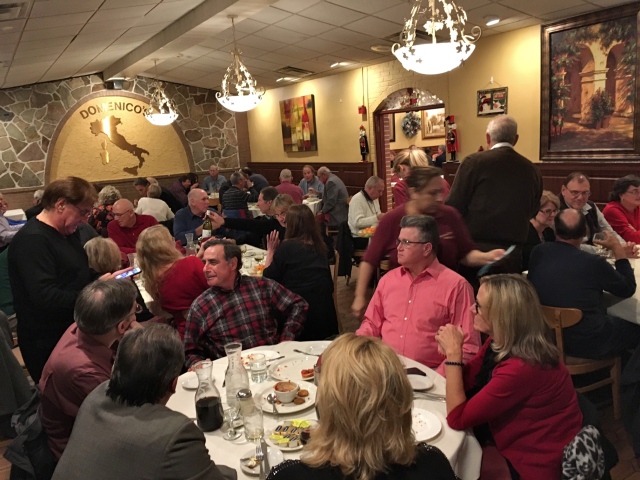 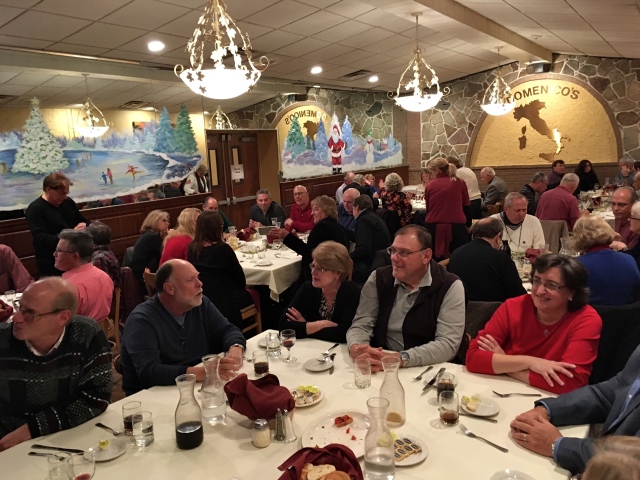 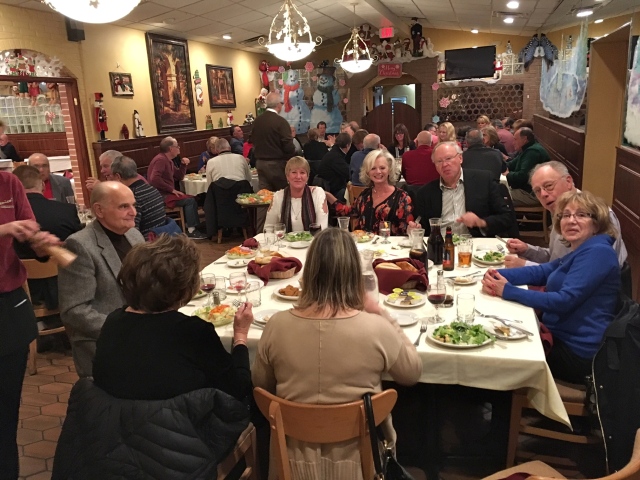 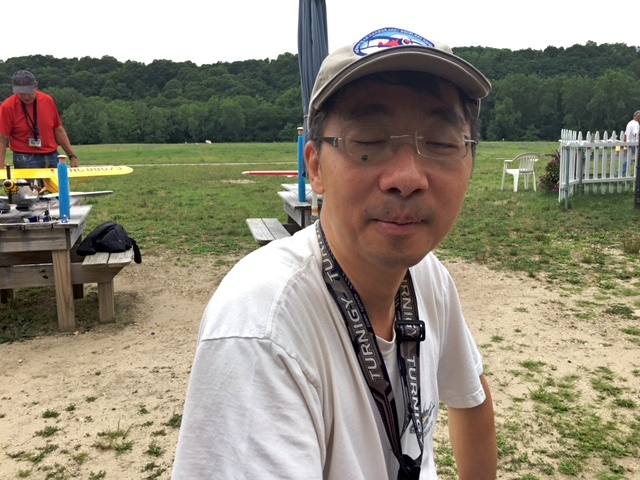 The name Xinhai Dude 辛亥生 is a pun in Chinese, as it means both “he who was born in Xinhai” as well as “he who studies Xinhai”. I had an ambitious plan to write something about the great Xinhai Revolution of 1911, thus my blog https://xinhaidude.com. But after an initial flurry of activities the initiative petered out. One day I will still carry it through. But for now, this website has turned into a conglomerate of my work on various topics of interest to me, including travel pictures, RC model airplane flying, ice skating, classical music composition, science fiction short stories, evolution and atheism.
View all posts by Xinhai Dude 辛亥生 →
This entry was posted in HHAMS, Photography and tagged 2016, Big Bubbles, FPV, Funday Monday, Hempstead Harbor Aero Modelers Society, HHAMS, holiday party, Ironman, lost planes, Model airplanes, Model Aviation, paintball, planes, Port Washington, radio-controlled model airplanes, runway, snow rake. Bookmark the permalink.