3Doodler Monkey on a Prop Balancer

3Doodler monkey on a prop balancer

Here is my latest 3Doodler creature – a tiny monkey swinging on a prop balancer that I bought for my RC planes. The prop balancer sat on my workbench collecting dust. So I figure it would be more useful as a prop for the new 3Doodler creation. Also check out the Miniature 3Doodler Corsair from last year. Both are made at the same time of the year – they are birthday gifts. It’s becoming a recurring theme :)

Unlike the Corsair, this one is made without a plan, and done with a free hand. That is because the monkey was made as a joke, after I got frustrated trying to create a 2D painting with the pen on canvas. Due to the impromptu nature of the work, it did not occur to me to take pictures of intermediate steps.

I started with the shoulder blades. I built two hands from there in black. Then I added the head (in black). Then I grow its body, and added the two legs. This created a black creature that roughly resembled a monkey. Hands and feet were a bit tricky to shape right. But they turned out well. I think I am getting the hang of it.

I held the evolving blob in my left hand, and the pen on the right. The pen was quite bulky and got in the way of things, making most of the work rather difficult. For this reason I made the tail separately and did not glue it to the body until the very end.

I then switched to the brown stick to give the body a better shape, and to add to the structural integrity. Then I finished it with eyes.

The monkey is removable from the bar. The bar is held magnetically between the balancer columns. There is no friction between the bar and the frame. As a result the monkey swings quite well in this setup.

Note a small painting with what looks like a snow monkey 3Doodled on canvas in the background. That one turned out horrible. 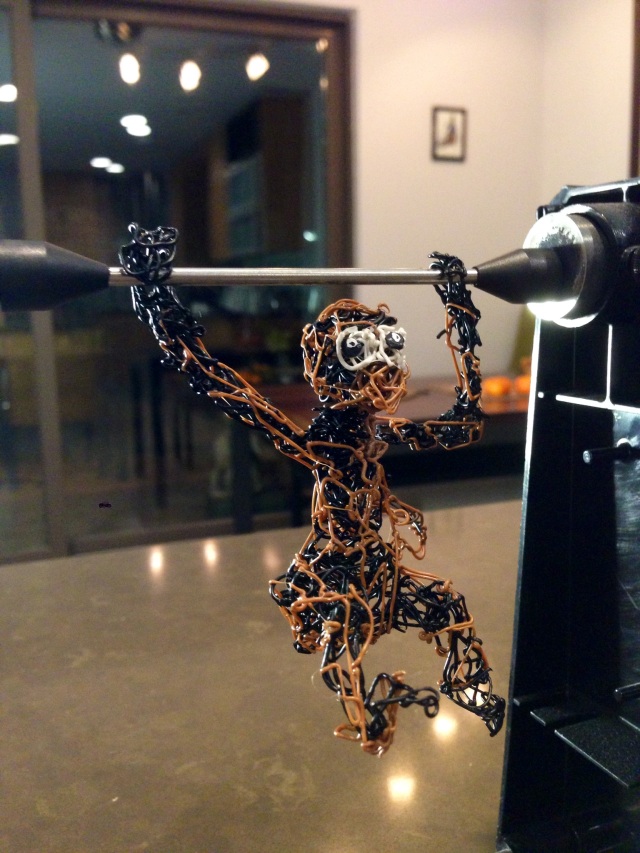 The name Xinhai Dude 辛亥生 is a pun in Chinese, as it means both “he who was born in Xinhai” as well as “he who studies Xinhai”. I had an ambitious plan to write something about the great Xinhai Revolution of 1911, thus my blog https://xinhaidude.com. But after an initial flurry of activities the initiative petered out. One day I will still carry it through. But for now, this website has turned into a conglomerate of my work on various topics of interest to me, including travel pictures, RC model airplane flying, ice skating, classical music composition, science fiction short stories, evolution and atheism.
View all posts by Xinhai Dude 辛亥生 →
This entry was posted in Drawings and Paintings and tagged 3Doodler, 3Doodler Pen, Miniature Monkey, Monkey, Propeller Balancer, RC Planes. Bookmark the permalink.

1 Response to 3Doodler Monkey on a Prop Balancer