A Resurrected Ornithopter – the Flytech Dragonfly

The Flytech Dragonfly was one of the most innovative flying toys when it came out in 2007. It was the first radio-controlled ornithopter mass-produced for the general public. Sadly it is no longer available for purchase. To add insult to injury, there has been nothing in the market for ten years that delivers remotely the same level of giddy fun for the money. Some recent event reminded me of the Dragonfly from WowWee, so I went through boxes in my basement to find the two units I bought in 2007. 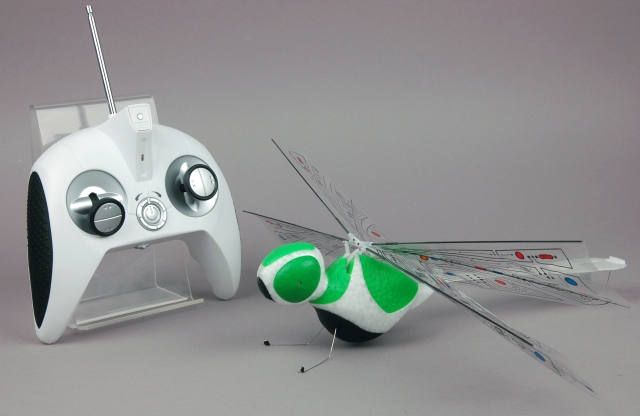 Unfortunately their tiny lipo batteries have since gone bust. With help from ancient posts on rcgroups.com, I managed to resurrect one of my dragonflies with a new setup. It allows me to reuse abandoned lipos from my Blade Nano QX which I have aplenty. Suddenly I no longer need to wait for 20 minutes between flying sessions to charge the built-in battery. I can now effectively fly it non-stop by plugging in replaceable batteries.

Resurrected Dragonfly ready for its maiden flight. A 1S 180mAh lipo is inserted from behind.

This is a video showing how the Dragonfly flew under light breeze, almost exactly 10 years ago.

After repeated crashes, this was how the flying machine looked 10 years go, as uploaded to Wikimedia and as used on the Wikipedia article on the Dragonfly, in 2007.

This is the same sad Dragonfly found in a box in the basement, in 2017. 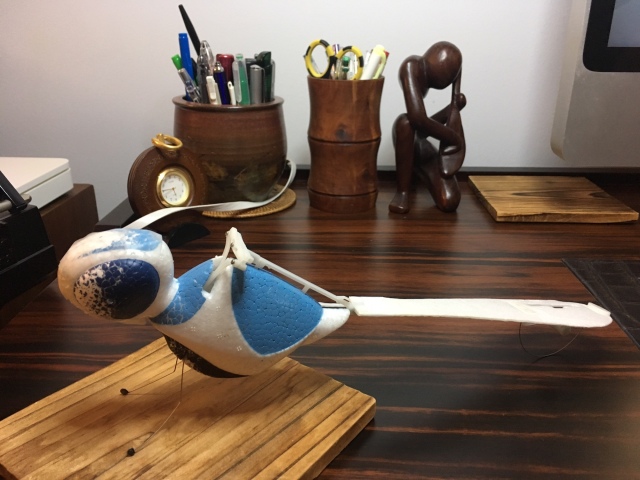 Dragonfly after 10 years in a box

In the same box was a green Dragonfly I bought but never maidened. 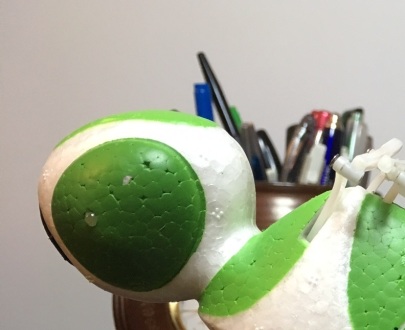 I consulted RC Groups for expert accounts of how to dissect the machine and replace the built-in battery. See this thread and images from this thread. I decided not to cut the whole machine open, unlike what people have done. I was going to open up a small section of foam around where the battery was.

Be warned that lipo batteries will burst into flame and burn chemically if punctured. This is not a matter to be taken lightly. I carefully studied where the lipo was situated from RC Groups images, and marked the lipo area, before I took up the craft knife.

Foam cover around battery was cut off carefully 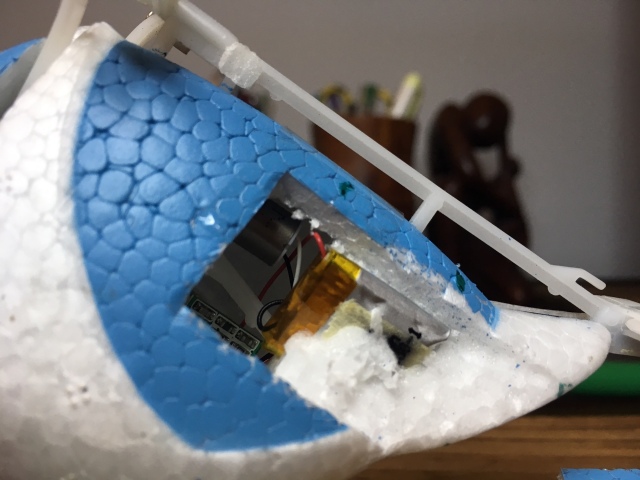 The lip was wedged firmly between foam for CG stability

I cut off the built-in 50mAh lipo. Then cut off more foam to make space for my 180mAh lipo. I figured that I would be able to adjust for proper CG by tweaking how much the pack was pushed into the body of the machine.

Built-in lipo removed, and space was made for bigger lipo

180mAh lipo inserted from behind 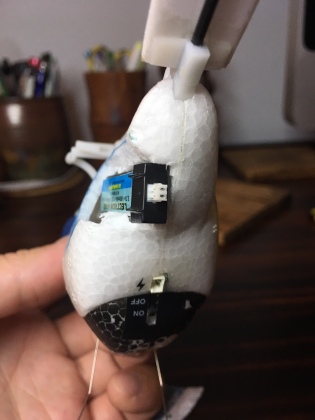 View of the behind of the machine

Foam cover replaced with the lipo inside

I used the battered blue Dragonfly as a guinea pig, to ascertain where the built-in 50mAh battery really was, and to make sure my 180mAh lipo would fit. Once I knew, I took the craft knife to the unused green Dragonfly. 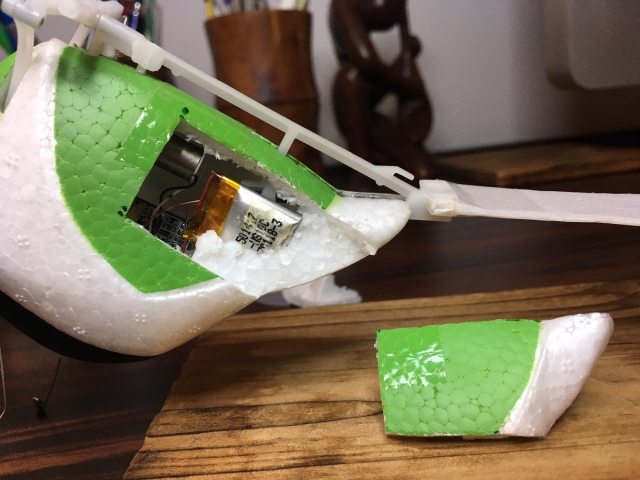 Foam cover cut out on the green one

After removing the built-in lipo, I cut off the lipo lead from a broken Blade Nano QX, and soldered it to the machine.

Soldering on an MX connector

Here is the resurrected Dragonfly sitting on my work desk. 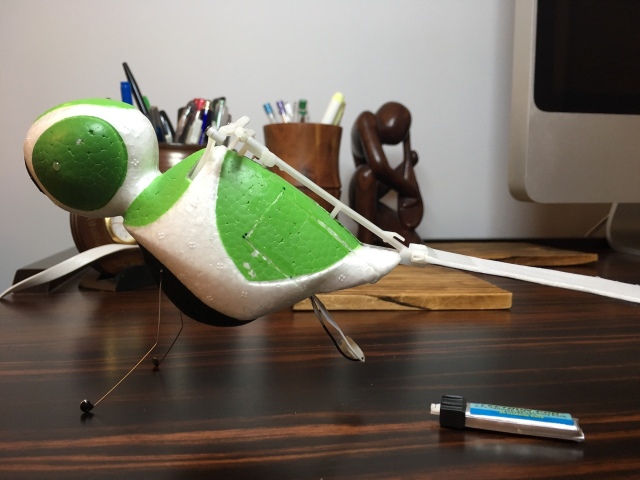 Now. It is time to find out whether the resurrected machine will actually fly. If you zoom in and look carefully, you will see that I was charging lipos of various capacities on the bench. From left to right: 180mAh, 150mAh, 70mAh.

On a workbench at the aerodrome

It was always prudent to take some pictures of your bird before you maiden it. This really was the green Dragonfly’s maiden flight, even thought I bought it 10 years ago.

Sadly it did not fly well. There wasn’t much wind this day. But I found that the giant insect was extremely unstable without the tail ribbon. The whole thing appeared to be tail heavy. And I couldn’t insert the lipo further to move the CG. Being a lazy person I just taped a metal washer to its jaw.

Metal washer taped to the jaw

Now the bird could barely ascend at full throttle. So I ripped out the metal magnet rest from the belly.

It was still tail heavy. I moved the washer to the nose in a futile attempt to correct CG.

Metal washer moved to the nose

I gave up. It was too heavy. I removed the washer. Then I moved the lipo out and taped it to the side of the bird to try to find the right CG.

Battery moved outside and forward

It flew slightly better, but remained temperamental. If I launched it right and got the throttle level just right, it flew for a while. Otherwise it nosed up and then stalled and dropped. The insect wanted to fly to the right, so I applied trim correction. I tried moving the battery to the other side of the body. It made no difference.

Battery moved to the right side

The WowWee manual actually claimed that with enough expertise, a skilled pilot could make the Dragonfly take off from level ground. I gave it a try. I guess I wasn’t skilled enough.

Trying to take off from the runway

This video shows the first flight of the maiden day that lasted for more than 10 seconds.

One of the few still pictures of the flight.

Another flight that didn’t end right away. I don’t recall whether this was the 180mAh lipo or the 150mAh lipo.

In desperation, I swapped the battery out for the small, 70mAh lipo. 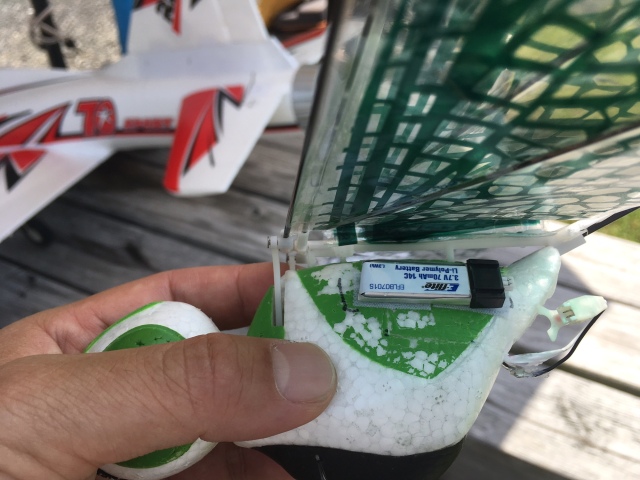 The giant insect flew so much better on average, compared to earlier. I realized now that weight is a real problem. On the other hand, the wind has picked up. Maybe it has contributed to the ability of the Dragonfly to lift itself…

I don’t know. Perhaps this was not a successful resurrection. Maybe that Full River built-in lipo had a much higher discharge rate. I felt that my batteries didn’t provide enough lift at full-throttle, given a neutral CG.

I don’t actually want to strip the Dragonfly of its foam body like people apparently do, just to reduce its weight. Maybe I’ll order a few lightweight 50mAh lipos and call it a day. All I really want is to avoid the 20-min recharging time between flights. Having a few lipos I can swap in will solve my main gripe.

Oh, well. Fly responsibly. And try not to make garbage – that’s actually not a difficult goal to achieve, with the Dragonfly. It appears to be indestructible.

The name Xinhai Dude 辛亥生 is a pun in Chinese, as it means both “he who was born in Xinhai” as well as “he who studies Xinhai”. I had an ambitious plan to write something about the great Xinhai Revolution of 1911, thus my blog https://xinhaidude.com. But after an initial flurry of activities the initiative petered out. One day I will still carry it through. But for now, this website has turned into a conglomerate of my work on various topics of interest to me, including travel pictures, RC model airplane flying, inline skating, ice skating, classical music composition, science fiction short stories, evolution and atheism.
View all posts by Xinhai Dude 辛亥生 →
This entry was posted in HHAMS, RC Planes and tagged 150mAh, 180mAh, 50mAh, Aerodrome, battery, bird, dragonfly, flytech, Flytech Dragonfly, full river, HHAMS, lipo, MX connector, ornithopter, Port Washington, radio-controlled, replacement. Bookmark the permalink.