Ogunquit in September – for the model aeronautically-inclined

This is a guide to upcoming articles I will be publishing on Ogunquit, a small town at the southern tip of Maine. The guide serves as a preview to these articles, before they are written and published, showing the beautiful Ogunquit river, the town and the beach named after it, in mid September. This was when kids were force off the beach, back to school, and just before the autumn arrived in full force. Some articles will explore the Marginal Way, Perkins Cove, Cape Neddick, York, Wells, Kennebunkport and plenty of public beaches in the area. Some will focus on hotels we’ve stayed at – the Tidal Suites at the Norsemen and the Ocean Terrace Rooms at Cliff House. There will be plenty of 360° panoramic photos that can be viewed with the Google Cardboard – some scenary simply cannot be experienced without the use of VR.

I’ve also brought the current obsession of my life together with travel and videography. Most of these articles will be of interest to those who are model aeronautically-inclined. While I did not have room to bring big model airplanes, I did pack two micro airplanes and a variety of kites. While flying a sailplane on the peaceful and expansive Ogunquit Beach proved to be a relaxing pastime, fighting the precarious Bald Head Cliff in inclement weather against a stormy sea turned out to be quite challenging. Equipment for the pursuit of a frustration-free beach flying will be presented as well.

In short, these will be articles I wished someone had already written, for people like myself. But I did not find them online, despite vigorous googling before I departed for vacation.

Did I mention that I adopted a pet seagull during this trip?

Pictures I’ve taken on a meager iPhone will be culled, and the remaining usable and useful ones uploaded to Wikipedia, for illustrations on various relevant articles, continuing my series of Wiki Vacations (from here and there). Articles will then be revised to link to full-resolution images on Wikimedia, for what these mediocre iPhone pictures are worth.

I spent countless nights before the trip googling for the best beach equipment to bring, to no avail. If you are looking for novel contraptions that solve known problems with ancient beach equipment technology, you will not be happy with what you find online today. Even Google isn’t smart enough to weed out hastily-assembled, so called “top ten beach equipment” websites that simply scout Amazon for highest-ranking sales. YouTube is full of computer-generated videos with screenshots stole from above-mentioned “top ten beach equipment” websites. And most search engines nowadays only want to show you online shops, because… that’s how they make money.

This leaves old fashioned research work as the only option. I read and combed through tons of user reviews, and wrote notes. The trip proved that I did find the right beach equipment to buy. I don’t monetize my blog. I have no skin in the game. You can trust that when I talk about a product and link to a page, it’s simply because I personally like the product.

Head to Modern beach equipment for the model aeronautically-inclined.

Tidal Suites at the Norseman Resort

The Ogunquit Beach truly is a special place. Clearly, the quality of its sand is nothing compared to the quartz-based white sand beach at Siesta Key. But Ogunquit is unrivaled in its tide-induced split personality, among beaches of the world.

At low tide, the tidal Ogunquit River is reduced a mere trickle, and an expansive Ogunquit Beach emerges. At high tide, the ocean completely swallows the expansive beach, forcing merrymakers to congregate into an ever-denser crowd, looking for a place to stand on the ever-disappearing beach.

The Norseman Resort on Ogunquit Beach

Ever since I stopped by Ogunquit years ago, for an afternoon on our way from New York to Acadia, I had always wanted to come back and stay on that magical beach for a few days. But I couldn’t find a beach-facing room in the newer buildings of the Norseman, the only beachfront hotel in this entire town.

Information about rooms at the Norseman is scarce online. There are some user reviews at TripAdvisor. But most are not very helpful. Then a handful of people on TripAdvisor talked about the Tidal Suites, a new building that became available in 2015 at the Norseman . It was more expensive, but also more spacious and secluded. Instead of facing the ocean, however, it overlooked the river.

As usual, there was not much to be found online about these suites. I was very interested, but had plenty of unanswered questions before I could commit to book a room there. 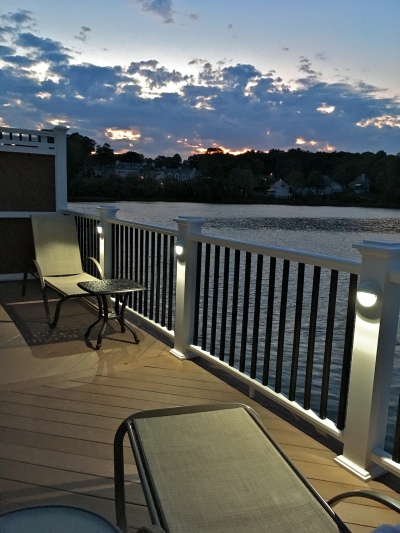 Sunset at the Tidal Suites deck at high tide

I booked a suite at Tidal Suites. Head to Tidal Suites at the Norseman Resort for an in-depth article on the suite, the resort and the beach.

We stayed at Cliff House during the second leg of our trip. And I had a good time flying my model sailplane, while standing on perilous rock formations, with multi-person-tall waves pounding on these same rocks.

Flying a sailplane standing on the rock, as seen from the room

It was a lot of fun flying an UMX Radian on that rock formation.

The resort landscape was painstakingly manicured. 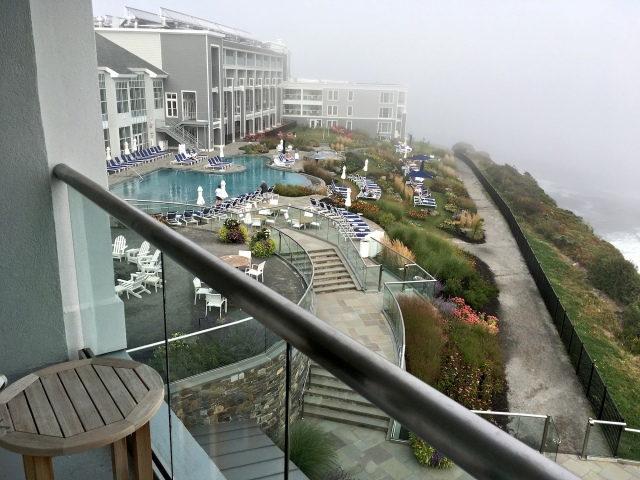 View of the resort landscape from the guest room

But it was not easy to get a room with the best combination of views of the ocean, the main rock formation, and resort landscape. Very few rooms had all of these views. And some of the most costly rooms in fact had eclipsed views by adjacent buildings and structures.

Flying a sailplane at and around Ogunquit

The main and the last installment in the series is Droning at and around Ogunquit. Together with the modern beach equipment installment, it details everything you will ever need, before you head out to fly a drone or two in this beautiful beach town.

My main interest in this trip was to fly RC planes by the ocean. To that end, I booked a suite at the Norsemen Resort, and for the second half of the trip a room at the Cliff House. This allowed me to fly my planes on a whim, at the Ogunquit Beach and later on a perilous rock formation at the Bald Head Cliff, without needing to plan for these activities. One moment I would be drinking my morning coffee on the balcony just after sunrise, and two minutes later I would be out there flying my micro sailplanes.

During the day I walked or drove to nearby oceanfront locations, to sample what this place had to offer. These day trips took me to popular tourist attractions such as the Marginal Way. They took me north to Wells Beach, Drakes Island Beach, and then farther to Gooch’s Beach, right next to president Bush’s compound. They took me south to Cape Neddick where I visited both the Long and the Short Sands Beach, plus the famous Cape Neddick Light.

Points of Interests around Ogunquit

Here are some video highlights.

For details, head to Droning at and around Ogunquit.

That’s it. Cheers. Fly safely. And try not to make spare parts.

The name Xinhai Dude 辛亥生 is a pun in Chinese, as it means both “he who was born in Xinhai” as well as “he who studies Xinhai”. I had an ambitious plan to write something about the great Xinhai Revolution of 1911, thus my blog https://xinhaidude.com. But after an initial flurry of activities the initiative petered out. One day I will still carry it through. But for now, this website has turned into a conglomerate of my work on various topics of interest to me, including travel pictures, RC model airplane flying, inline skating, ice skating, classical music composition, science fiction short stories, evolution and atheism.
View all posts by Xinhai Dude 辛亥生 →
This entry was posted in Being a Wikipedian, Photography, RC Planes, Travel and tagged 360° panoramic photos, Bald head Cliff, beach equipment, beaches, birds, Cape Neddick, Cliff House, drone, Google Cardboard, great black-backed seagull, Kennebunkport, kites, Maine, Marginal Way, Model airplanes, Norsemen Resorts, Ogunquit, Perkins Cove, radio-controlled, sailplane, September, Tidal Suites, UMX Radian, Wells, York. Bookmark the permalink.