What is a Doob 3D Selfie?

Last year my family visited the miniature park, Madurodam. We had ourselves scanned at the Fantasitron, and subsequently our 3D selfies printed by Shapeways. I was so impressed that I wrote an entire article about 3D scanning, stereophotogrammetry and gypsum-based 3D color printing. We have since found another venue for making 3D selfies, this time in New York City. The company, Doob, delivers an impeccable service, starting from the first moment we made an appointment online. This smooth and professional experience extends to email reminders, in-store consulting, and actual 3D scanning. It concludes with flawless 3D-printed figurines delivered to our house.

However, Doob as a company is rather secretive about its scanning process and 3D-reconstruction software. It is almost impossible to find any information about its 3D printing process. Unlike Madurodam and Shapeways, Doob offers no technical details on either its American website, or the English version of its main German website.

Hopefully this article will help answer some of the most frequently-asked questions folks may raise, concerning Doob 3D selfies. If you come across this article, make sure you first read the one about Madurodam/Fantasitron 3D selfies, to understand the basic concepts.

Doob brags about its worldwide stores. But there are only four stores in the US: two in New York City, one each in LA and San Francisco. We walked into the NYC SOHO store, and immediately found the experience different from that at the Fantasitron. 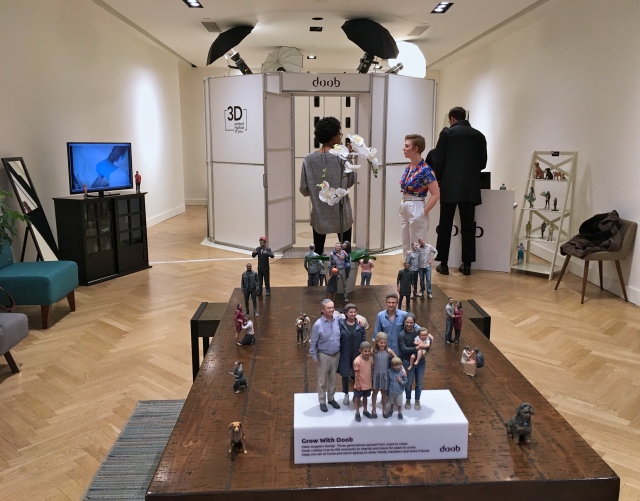 Doob store at SOHO, NY, with its signature 3D selfie scanning booth in the background

The Fantasitron is designed to handle large number of tourists who follow the crowd at the park to its door. The average customer spends no more than 3 minutes at the scanning booth. Nothing is customizable – everyone is scanned standing up. Most people probably walk away after scanning, never bothering to register an email, less pay Shapeways to print these figurines. This is not unlike how most people never actually buy pictures of themselves offered by theme park rides. If a customer actually pays for it online, the customer then receives a 3D selfie in 1:20 scale measuring 4″ or less. This small figurine is expensive by toy standards. Yet it is still reasonably affordable to all.

In constrast, Doob is all about flexibility and satisfying the requests of customers. There are certainly some curious tourists that venture into the store, lured by 3D figurines at the display window. But real customers show up at the store, after making appointments online. The online calendar makes appointments available in half-an-hour slots. Every customer gets the undivided attention of its creative specialist for 30 minutes. After the scanning process is done, a reconstructed 3D model is displayed on the TV screen, allowing the customer to examine the outcome. Satisfied customers will then pay for the 3D print, before they walk out of the door.

The Doob store showcases 3D selfies of all sizes ranging from tiny 4″ figurines to respectible statues as tall as 14″. The 4″ option does not allow for high fidelity in the making of a person’s face. This is not surprising – my 3 1/3″ figurines from the Fantasitron also had just thin black lines representing my eyes. Bigger figurines support incrementally finer-grained facial features. 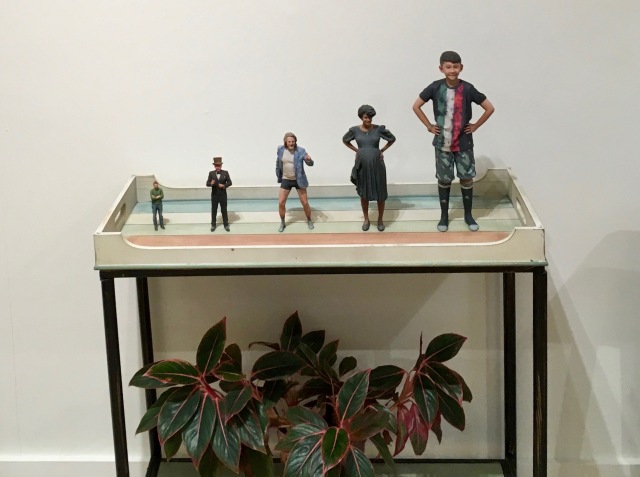 The tallest figurine at 14″ commands a hefty price: $695. Compare this to the 4″ figurine which costs only $95. There are three components to the cost. There is a human cost in making 3D selfies, both in the final personal retouching of auto-reconconstructed 3D models, and in the actual manufacturing process where a person manually cleans printed gypsum figurines. But this labor cost scales linearly to size changes in the case of modeling details, and quadratic in the case of surface area to be hand-cleaned.

On the other hand, the third cost component, the amount of material used and the associated cost of printing, increases at cubic rate with respect to changes in linear size. The company apparently will make statues taller than 14″, upon request. But clearly the price will skyrocket polynomially, given the cubic growth of the volume. Consider the 14″ vs the 4″ figurines. While the tall figurine is only 3.5 times taller, it takes up almost 43 times the volume. If the figurine is further enlarged to be twice as tall at 28″, its volume will be 343 times that of the 4″ figurine. 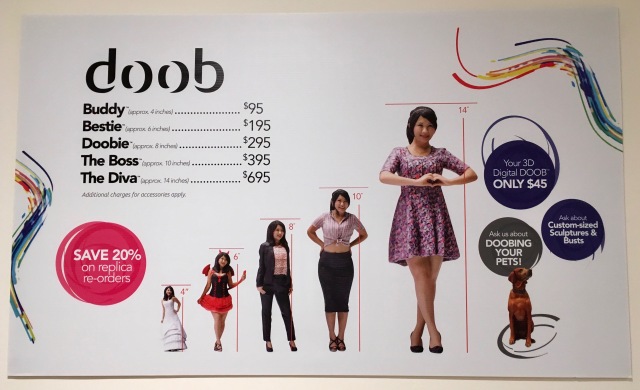 Size options and pricing for figurines of various sizes

The scanning booth also looked different from the Fantasitron. I noticed right away that there were fewer cameras.

Whereas the Fantasitron appears to house some 200 tiny cameras, the Doob booth deploys only 54 cameras. But sheer quantity is deceiving. While the camera lenses at the Fantasitron looked no bigger than those found on iPhones, at Doob there is a real SLR camera with a real lens behind each rectangular panel cutout. 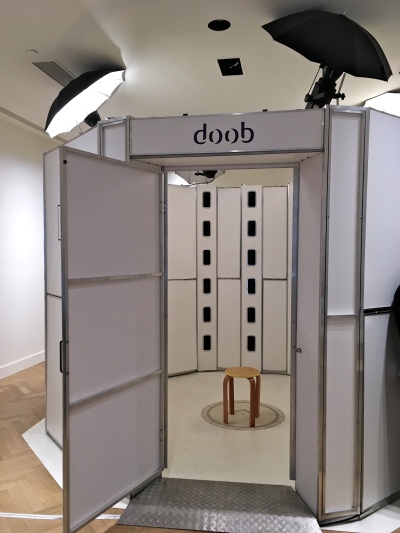 Scanning both at Doob

Canon EOS Rebel T5i DSLRs can be seen in an enlarged picture of the Doob booth. I imagine that these allow Doob to capture more 3D and surface details, in higher resolution and with less noise. It is probably indispensable for very large figurines. But I don’t know how important this factor is, when printing my tiny 4″ inch selfie. 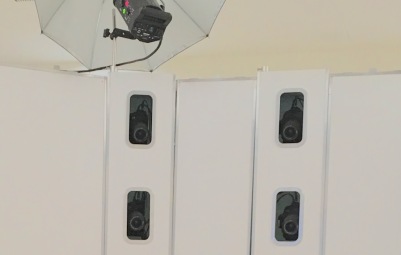 There is one Canon EOS Rebel T5i DSLR behind every cutout

The Fantasitron cannot handle more than two people in any given scanning and 3D printing order. I am not sure if the same limit applies at Doob. I never did ask – we were just two people. But we did see 3D selfies with at least three people on display at Doob.

Shapeways charges the same price for a 3D selfie scanned at the Fantasitron, whether it is one or two people. At Doob, on the other hand, every figurine modeled and made is paid for, even if two or more people are scanned entangled and printed together in one 3D selfie.

While at the Fantasitron one can’t deviate too much from the standard pose, Doob encourages everyone to try wild poses. No longer do you need to keep your hand in your pocket, as required at the Fantasitron. I saw, on the display table, a figurine piggybacking on another. There was a bachelor kneeling to propose to his girl. Then there were a few figurines that sat on chairs. So we decided to make a sitting 3D selfie that could be left on a ledge.

Our choice required that 5 separate scans be taken. I don’t know if all poses require the same number of scans. But this one did. The first scan was where I sat on the stool, and Elisha sat on my lap. That was the main scan. Then supplementary scans were made, apparently as aids to the artists when they retouch the 3D model. We each stood alone in the booth to have our body scanned, with both hands spread out from the body, and our palms wide open. Then we each emulated our sitting pose, alone, so that cameras could take pictures of what had otherwise been obscured by the other person in the two-person scan.

We sat on that stool for our selfie

After a few minutes of computer crunching, a preview 3D model was shown on the TV screen. The model looked accurate, as the specialist rotated it left and right. But the level of detail was horrifying to look at, indeed. By this I meant that every last imperfection on my face was faithfully shown. It was a bit disconcerting. Thankfully the printed figurines didn’t have enough resolutions to show these natural imperfections. 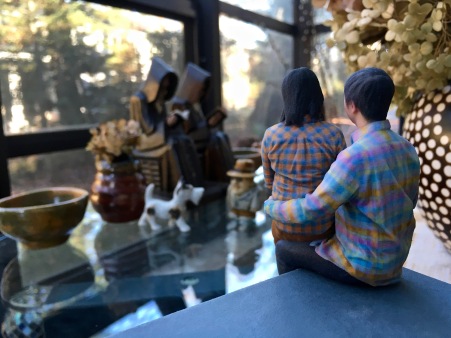 The Fantasitron figurines are apparently printed at the exact scale of 1:20. This exact scale is cited in emails from Madurodam and Shapeways. Online product pages also clearly indicated this. My Fantasitron figurine measures 3 1/2″ from head to the pedestal. Taller people will probably end up receiving 3D selfies as big as 4″ tall.

The Doob figurines, on the other hand, appear to be arbitrarily scaled, so that the finished product measured exactly 4-inch tall, or whichever size the customer paid for. We paid for the smallest 4″ size. Our figurines measured exactly 4″ from my foot to Elisha’s head, despite the sitting pose. This came out to a scale of roughly 1:13. If I stood up in the scan, I would have received a figurine in 1:17 scale.

Recall that we damaged our Fantasitron selfie. So I learned to protect it with coats of acrylic varnish. It is not clear whether the Doob figurines were already treated with a coat of epoxy or varnish. They appear to be glossier than Fantasitron ones, but only slightly. To play it safe, I sprayed two coats of varnish on them. And I took the opportunity to add more coats to the Fantasitron ones, as well. Comparing the end results, I think the Doob selfie had already received a final coating of varnish at the lab before it was shipped. With my additional varnish, I can already see a sheen building on the boots of my Doob figurine, especially in crevices. On the other hand, the Fantasitron figurines still look matte, despite now having received four coats of varnish. The gypsum seems to have an inexhaustible buffer for absorbing varnish I spray on it. 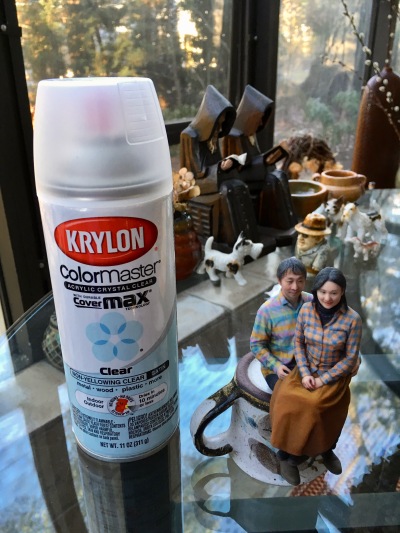 I used a glue gun to glue the 3D selfie to an inverted cup.

It is evident that care had been taken by Doob artists to ensure that the selfie could sit flush against a surface. But with Elisha on my lap, the selfie is front heavy. It does not take much effort to topple it from its sitting position. It seemed to me that a dab of hot glue was a reasonable insurance.

Looking at the fine 3D selfie, I can’t but wonder how much time a human artist spent polishing the 3D model that Doob software reconstructed from 2D pictures. If very little human touch was required, then Doob must have refined their software to be amazingly perfect. There are clearly trouble areas around hair, fingers and other dedicate features that, as a software engineer myself, I know must be quite hard for software to handle. The same can be said of the amazing 3D selfie scanned at the Fantasitron and made by Shapeways.

Share your experience at Doob or with 3D selfies in the comment section below. There is a lack of information online on this topic at the moment. Cheers.

The name Xinhai Dude 辛亥生 is a pun in Chinese, as it means both “he who was born in Xinhai” as well as “he who studies Xinhai”. I had an ambitious plan to write something about the great Xinhai Revolution of 1911, thus my blog https://xinhaidude.com. But after an initial flurry of activities the initiative petered out. One day I will still carry it through. But for now, this website has turned into a conglomerate of my work on various topics of interest to me, including travel pictures, RC model airplane flying, ice skating, classical music composition, science fiction short stories, evolution and atheism.
View all posts by Xinhai Dude 辛亥生 →
This entry was posted in Being a Wikipedian, Drawings and Paintings, Photography and tagged 1:13 scale model, 3D Figurine, 3D photo booth, 3D Portraits, 3D printing, 3D Selfie, 4-inch model, acrylic varnish, Doob3D, Fantasitron, Full Color Sandstone, Gypsum, Madurodam, Mini-me, Shapeways, The Hague, Varnish. Bookmark the permalink.

5 Responses to What is a Doob 3D Selfie?