I was talking to a friend about my oxtail steak I once plugged at r/sousvide. I was telling him how I got mostly negative feedback along the lines of “an oxtail is an oxtail is an oxtail – you stew it”. Retelling this story reminded me of pictures I took while undertaking that 24-hour endeavor. Here is one of these pictures.

I love oxtail. But instead of stewed or braised oxtail, I wanted to try to cook it like one did a steak, against the ridicule from the master of my household of two. I wanted a chewy, steak-like meat texture for my oxtail, if possible. As I put the oxtail in the water bath, I wrote on r/sousvide asking whether this was a crazy idea. Most people said yes. But I soldiered on.

Sous vide recipes online mostly call for 100 hours at 140ºF, or 24 hours at 180ºF, when dealing with oxtail. And none of them try to finish oxtail as steak.

I debated with myself about how long I should leave it in the bath. I was disregarding those online guidelines, and was aiming for 24 hours at 140°F. I did have the prior experience of over-tenderizing my chuck steak for 6 hours – the meat came out with a texture approximating butter, and tasted like ham. But at that time I was just getting started, and I made the mistake of leaving seasoning into the vacuum bag to sit with the meat for 6 hours. So maybe it was because of the salt… 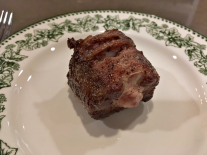 I ended up leaving the oxtail in the bath for only 24 hours at 140°F, as planned. Then I pan-seared it like I did steaks. Redditors were right – one could bath oxtail for a lot longer than other parts. The connected tissues were still there, but were tenderized to the extent that they were now pleasantly chewy. Maybe others would have preferred to bath it much longer. As for me, however, I like to chew on steaks. So 24 hours worked for me.

Here is another piece.

This is what it looked like after its precious meat was carved out. Would I do it again? Probably not. It turned out great and I loved it. But this was a lot of trouble for very little meat. I think I am going to stick to tenderloins for now.

The name Xinhai Dude 辛亥生 is a pun in Chinese, as it means both “he who was born in Xinhai” as well as “he who studies Xinhai”. I had an ambitious plan to write something about the great Xinhai Revolution of 1911, thus my blog https://xinhaidude.com. But after an initial flurry of activities the initiative petered out. One day I will still carry it through. But for now, this website has turned into a conglomerate of my work on various topics of interest to me, including travel pictures, RC model airplane flying, ice skating, classical music composition, science fiction short stories, evolution and atheism.
View all posts by Xinhai Dude 辛亥生 →
This entry was posted in Gourmet and tagged oxtail, pink, sous vide, steak, stew, tender. Bookmark the permalink.